Gong Fu Cha, native to China, is primarily a way of making tea rather than a ceremony.

In Chinese gong fu means mastery of a practice, a job, an art. Thus, the gong fu cha means all the necessary gestures to fully realize a tea.

Unlike the chanoyu, the Japanese tea ceremony, no coding exists for the gong fu cha. There is no equipment specifically dedicated to this practice. However, we note several key principles that can be found everywhere in Asia and meet some logic to brew the best tea leaves.

Perform infusions in small quantities in the range of 100 to 200ml. To do this, use small teapots and gaiwans is ideal. It will be easier to control its infusion, unlike large volumes. 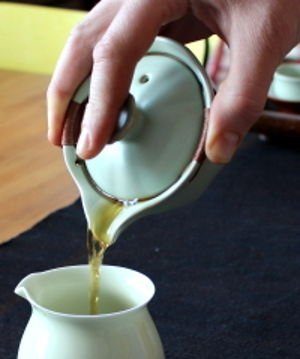 order to extract the best flavors of tea, the leaves are bathed in the hottest water possible. The use of Yixing teapots keeps the temperature at the top thanks to Yixing clay properties.

Some teas can be infused very fast, of the order of a few seconds. This method applies especially to the families of puerhs teas. Pour the precious liquid from a precise and meticulous gestures, that probably the highlight of the gong fu cha …