Many tales have been passed in Asia to explain the appearance of a particular tea. Here we present the two most famous that explain how man discovered the magic of tea!

In Chinese mythology, the Emperor Shennong is the source of all discoveries around agriculture and the medicinal use of plants. He passed all his knowledge and for the good of his people.

In the interests of hygiene, it required all his subjects do boil the water before drinking. One day, sitting in the shade of a bush, a few sheets of it fell into his bowl of hot water. He drank, found the pleasant taste and felt the benefit of this infusion. From that day, the tea became a beneficial plant for the subjects of the emperor. 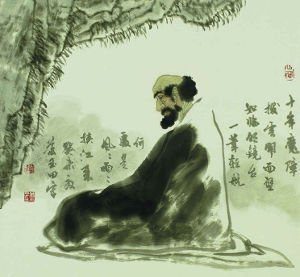 In the sixth century, the Indian monk Bodhidharma went to China to preach Buddhism. His influence profoundly affected Asia since he founded the school Chánin known as the Zen school in Japan. He also taught the monks of Shaolin meditation techniques, breathing and fighting.

Legend has it remained 9 years meditating in a cave, facing a wall. One day, furious at having dozed off after 7 years, he cut off his eyelids and threw them to the ground. Of this flap of flesh soon was born the first tea of humanity, tea was born! Consumption at once allowed the monks to keep them awake during long meditation sessions.