The British East India Company, created in 1600 by Queen Elizabeth I , was in direct competition with the Dutch for the import of Chinese products. In parallel, she conquered the Indian subcontinent throughout the seventeenth century.

Tea in exchange for opium

En 1711, the Company established a trading post in Canton in China, to import tea to Europe. Then, beset by financial difficulties, it set up an ingenious economic system but with disastrous human consequences : sell Indian opium produced in the colonies to the Chinese and then , using the collected money , buy Chinese tea. China quickly banned the sale of the drug, only , opium was smuggled from Bengal. 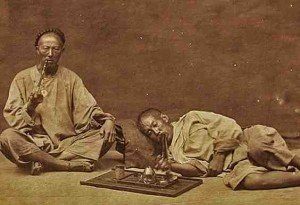 As early as 1729 , before the ravages of opium on the Chinese people, the Emperor Yong Zheng promulgates the prohibition of its traffic. It was not until 1839 that the court formally requests Queen Victoria of England to stop the opium trade . In June this year, 200 thousand chests of opium were destroyed. In 1840 , Britain triggers the first Opium War .

It took a second Opium War in 1856 that China bends to the will of the English and French nations. Consequently, the trade could resume largely in favor of England and tea continued his journey to the West.