Through their control of navigation and spirit of conquest in the 15th and 16th century, the Portuguese were the first westerners to settle in China. It’s in Macau they built the first buildings of their colony from 1553 . 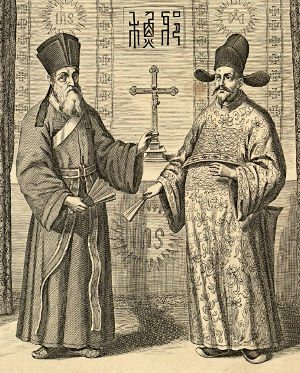 Once established businesses ports , it is the religious who were the most likely to fit both locally and in the imperial courts in Europe .

Thus Jasper de Cruz , a Portuguese Jesuit priest , is known to be one of the first Westerners to testify about tea and bring back to their country of origin.

Matteo Ricci (1552 – 1610) , an Italian Jesuit missionary , was appointed Portuguese Ambassador and , as such , was invited to the imperial court in Beijing. Before him, no Western was not as close to the Wanli Emperor. He described tea consumption in this way in his book « China in the sixteenth century  » : This drink is sipped rather than drunk and she is always consumed hot . He also noted that the bitterness was not unpleasant , and the drink was good for health.